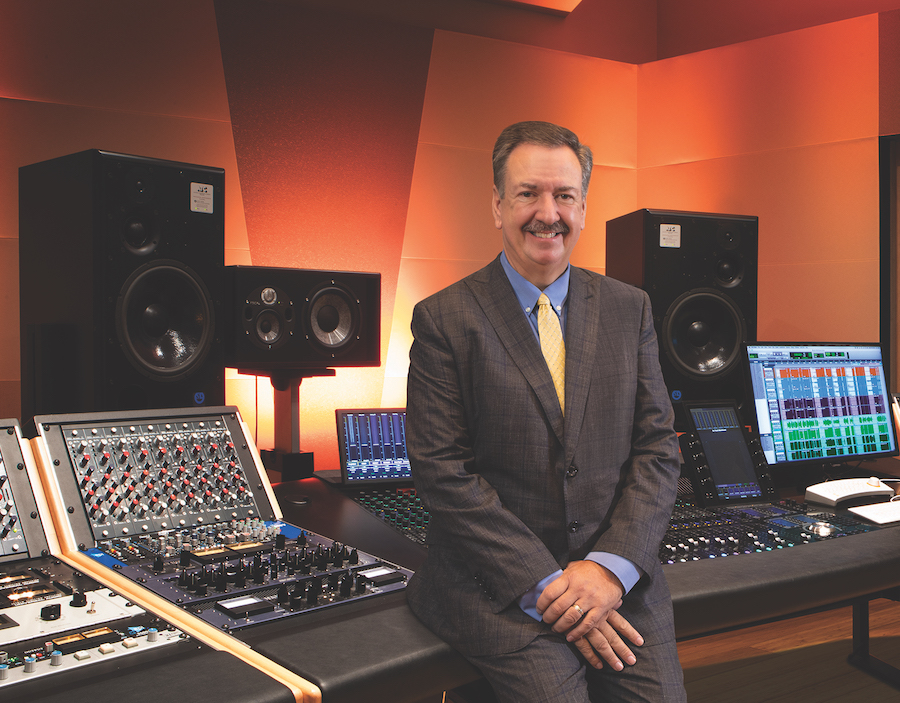 In March, at the onset of the pandemic’s spread in the U.S., much of musical product industry slowed to a halt, but some retailers started moving faster than ever. It was clear, then, that the companies that already had e-commerce capabilities in place were going to succeed and witness an online ordering boom equalling those seen on Black Friday and during the holidays.

In a way, it was a situation that the Fort Wayne, Indiana-based company Sweetwater Sound had been preparing for since its humble beginnings in 1979. As a pioneer in musical products e-commerce, the company was able to prevail, despite 2020’s barrage of chaos, resulting in a massively profitable year, an online gear festival that was larger than its past in-person iterations and winning Music Inc.’s Retailer of the Year award.

The company, which began in the back of a Volkswagen bus and has grown into worldwide leader in instrument retail, occupies a unique place in the musical product industry market, somewhere between the brick-and-mortar shops and tech giants like Amazon and eBay. Its success comes from the company’s ability to take the best elements from each — the capacity and efficiency of massive online dealers and the charm and care of mom-and-pop shops.

“[Sweetwater] provides a high-touch, high-engagement model with our team of 500 expert sales engineers that scales out with a layer of technology over the top,” said David Stewart, executive vice president and chief marketing officer at Sweetwater. “So, at one end of the spectrum, there may be a small dealer somewhere that can do a good job with the personal touch but perhaps doesn’t have the financial resources to build out the systems and personnel to provide the right products at the right price with a consistently great experience. Whereas at the other end, you have your pure-play [e-commerce] outfits that have no personal touch at all. The customer is just a transaction to them. You can order what [you have] already figured out you want, and they probably will deliver it on time. We can do that, too, but we bring so much more value to the table that makes the customer journey much more fulfilling and enjoyable.”

Rolling Up the Sleeves

When the company spoke to Music Inc. in October, Sweetwater’s total sales were up nearly 40% for 2020, which Chuck Surack, founder and president of the company, sheepishly admitted is partially due to the consumer habits that shelter-in-place laws encouraged. “We were selling interfaces literally [by the] thousands and thousands a week,” he said. “Interfaces and microphones that we might sell 200 [of in] a month, we were selling 2,000 in one week. It was just crazy.”

After the initial sales boom came a moment of panic, though, one in which Sweetwater’s future seemed less secure due to an industry-wide supply shortage. Stewart credits its merchandising team’s foresight to order an excess amount of inventory, and the willingness of employees to work long hours, with keeping the company afloat through the period. “That ended up carrying us through the spring, but by mid-summer, there were so many constraints on inventory availability we had to work nights and weekends to find ways to adjust to new paradigms across every part of the company, from marketing to shipping to finance and obviously sales,” Stewart said. “Demand in certain segments has been off the charts, while demand in others fell to near zero.”

Around the same time, Sweetwater ordered the majority of its non-warehouse staff to work from home. Coincidentally, the company had also just finished building a new 500,000-square-foot warehouse, allowing plenty of space for social distancing. To help with the influx of orders it was getting, though, Surack and his family rolled up their sleeves and got to work filling boxes everyday for eight weeks alongside the warehouse crew, a move other CEOs may not have been so willing to do. It’s an example of Sweetwater’s “culture of doing,” as Stewart calls it.

“Even at the very top, we stay close to the work, and we know that we win in paying attention to small things almost as much as the big ones,” he said. “We’re careful internally not to abstract ourselves too much from it. An example would be talking in percentages. When a company says our success rate is 98 percent, what does that really mean? What are the actual numbers of people impacted, and in what way? If air traffic controllers succeeded at getting airplanes safely on the ground at 98 percent there would be thousands of people dying in crashes every single day!”

For the rest of the staff who weren’t working alongside Surack in the warehouse, Sweetwater made sure to keep them up-to-date on company news and listen to all of their health concerns seriously.

“[Our employees’] concerns, from the valid all the way to the irrational, are important,” Stewart said. “There has been steady dialog internally about what is happening, and what we are doing about it, including a regular cadence of emails. In the early period, we sent just about everyone home for a few weeks, while a portion of the management team worked in the warehouse to try to keep as many orders as we could going to what turned out to be very appreciative customers. As we’ve brought people back, we’ve put in place a host of rigorous cleaning and distancing protocols, as well as employee education initiatives.”

This level of care and individual attention was also extended to the company’s customers. Surack often boasts that 82% of company calls that drive sales are outgoing live calls. With the pandemic, the calls kept going out, but the message changed.

“I told everybody just to call the customers, see how they’re doing,” Surack said. “Don’t worry about selling something, but just really check in with them. And our businesses are so relationship-based that customers were raving about [it]. They wanted some normalcy in their lives. They wanted to be able to talk to people. And they’d been stuck at home for quite a while. So they appreciated the phone calls.”

Outside of its regular sales, the company faced another obstacle. It’s annual product show, GearFest, had to go virtual. The show has grown in recent years, topping out at 18,000 attendees in 2019. By going online, the company attracted 160,000 attendees to the event, leading Surack to believe that a digital component will remain in place alongside future physical events. “It was a great event,” he said. “Sadly, the horse is out of the barn. So next year, we’re going to have to do both again. We’ll do it in person, and we’ll do it live all around the country, all around the world. It allowed us to harvest those [who] wouldn’t normally come and be in our campus when they were willing to spend 15 minutes or half an hour and do it remotely. So we’re already starting on that for next year.”

It’s a disservice to mention Sweetwater without referencing its connection to Fort Wayne. A company of Sweetwater’s size often relocates to high-traffic areas like L.A. or New York. However, Surack has stood firm and invested in the community by bringing talented individuals and money to the area, thus playing a vital role in the city’s recent growth.

At the center of the company’s Fort Wayne footprint is its campus, which takes up nearly a million square feet of campus space between the warehouse and the main building. “The culture is really strong. We have a full-time doctor in nursing. [They’re] available free all the time. We’ve got the gaming area with pinball and ping-pong and a pool table. We have an amazing cafeteria where we serve really high-quality food at subsidized prices. It’s just a great community of nearly 2,000 musicians. Half of them relocated to Fort Wayne when they took their jobs. And so it just creates a really strong, strong culture.

“It’s a big advantage for us having the campus here,” Surack continued. “It’s something like half of the U.S. population is within a few hours drive of here. We don’t serve in L.A., Southern California or New York as efficiently, but with UPS and FedEx, you can get to anywhere in the U.S. in a day or two anyway. There’s an airline hub in Indianapolis.”

Beyond Sweetwater, Surack has used his entrepreneurial skills to take charge of 15 different businesses by various means, including an aviation company, a car dealership and a theatre, all located in Fort Wayne, making him a large, important employer and economic asset to the community.

Surack broke down these businesses: “There’s Sweet Aviation, where we teach people how to fly airplanes and helicopters. We also do maintenance on airplanes. Another one is SweetCars, where we sell one- to three-year old, slightly used cars. But they’re brands that aren’t typically sold in Fort Wayne, like Lamborghini. Sometimes [it has] Porsches and Mercedes too. There’s Longe Optical, where we help you with your vision and your eyes. There’s the theater, which is a beautiful theater, but it also has a smaller nightclub and breakfast bar connected to it. Every one of [these businesses] is founded on great customer service. They all feed off of each other as we’ve gotten bigger and bigger.”

Class is in Session

Most retailers tout their customer service, but few can claim to put the number of resources into it that Sweetwater does. In fact, after talking to Surack for a few minutes, it becomes clear that customer service is the root of everything he does professionally. Before starting at the company, employees are enrolled in a 13-week course called Sweetwater University, which is comprised of over 300 classes aimed at educating employees on the company’s values, the shipping process, information systems and how to develop a relationship with the customer. The goal is to make sure that everyone’s first experience with Sweetwater is “just incredible.”

When pressed on the company’s future coming off of such a financially successful year, Surack admits that the e-commerce giant isn’t looking to stray from what’s working, and that it’ll be doing “more of the same.” However, that doesn’t mean he has any intention of slowing down. “The music industry is about a $20 billion industry, and we’re progressing past a billion this year, but that’s only one billion,” he said. MI