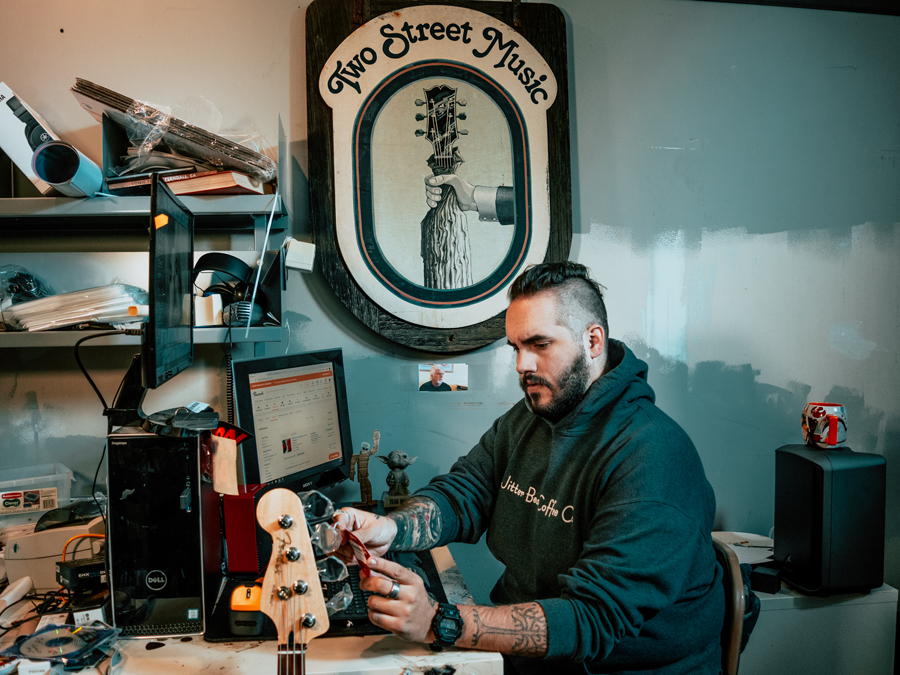 MI’s leaders have stressed the importance of meeting customers online for years, even decades. Covid-19 has shown it’s no longer optional.

As the world was locked down by coronavirus and the quarantine necessary to fight it this spring, one thing became clear quickly — e-commerce is king. Its ascent has been a perennial business story going as far back as the days of Y2K, but Covid-19 settled any debate on its essentialness once and for all. For MI businesses well-poised to sell online, there was a way out of all this, or there were some bright spots ahead. Businesses not or barely online may have found themselves staring into a void, as foot traffic in stores in many parts of the country shrunk to zero.

Starting in mid-March, the action for many companies, especially retailers, was to pivot. Pivot to their website, to eBay, to Amazon, to Sweetwater, especially to Reverb — a platform that’s become an essential place for buyers and sellers to connect since its founding seven years ago.

Not surprisingly, the online marketplace saw a sales surge. Reverb reported sales across the platform were up 50% in April, when the coronavirus crisis in the U.S. was in full swing. Mantova’s Two Street Music in Eureka, California, reported similar gains since the store itself shut down in mid-March. “Reverb’s been our main traffic area right now,” said Justin Grimaldo, the store’s online sales manager, explaining that its website is currently under construction. “We went from $32,000 a month up to $54,000.”

So, why are online sales booming at Mantova’s Two Street Music? Grimaldo cited boredom, as well as the economic stimulus payments many U.S. citizens received in April. “Basically after the whole quarantine thing happened and everybody’s getting all of their stimulus checks, they started buying more guitars, started buying tons of strings,” Grimaldo said. “People are wanting to learn something new because literally every message you see is, ‘I have nothing to do now.’”

Gregg Gammon, owner of Third Rock Music Center in Cincinnati, Ohio, saw the stimulus checks as a factor too, joking that he thought about changing the price of everything in the store to $1,200, the amount most Americans received as a result of The CARES Act. “I don’t know how many texts and emails and messages I got [on] Facebook saying, ‘Hey, I’ve got twelve-hundred bucks burning a hole in my pocket. I want to get something.’”

Gammon reported that Third Rock Music Center’s online sales were initially slow when quarantine began. He attributed this to people asking themselves, “All right, what’s the new reality going to be before I spend any money?”

But, things have rebounded significantly for the store. “We were down 60% in April overall, but our online sales were probably up a thousand percent,” he said, adding the store was doing well in May so far. “It’s like Christmas right now. I can’t believe how busy we are.”

What’s Selling, and Why

So, online sales are clearly up for many. But what’s selling can tell us a great deal about consumer needs and tastes and how they changed in quarantine. Answers varied from store to store. Third Rock Music Center found an interesting, surprising source of profit. “Probably every music store has a few boxes of clutter,” Gammon said. “I found at least a hundred items to throw out there on eBay, and I’ve sold over $3,000 worth of stuff that’s just laying around — parts and pieces of junk and stuff that you just accumulate.”

Backstage Music, which also saw a sales surge during quarantine, going from shipping a few packages per day to as many as 70 per day, saw an increase in orders for a very particular item.

“We were selling the fool out of number two clarinet reeds,” said Allen McBroom, owner of Backstage Music in Starkville, Mississippi. “I was puzzled by this and then it dawned on me. Adults were dragging out their old clarinets, going back to a number two reed and playing their clarinet for the first time in forever. I think there are a lot of clarinets in the United States that saw daylight for the first time in decades.”

According to Chuck Surack, founder and CEO of Sweetwater in Fort Wayne, Indiana, April was the company’s best month ever. “It’s a little bit uncomfortable to talk about when I know so many people are suffering,” he said. Sweetwater, a leader in MI online retailing, was fortunate to have opened a new half-a-million square foot distribution center in February. As such, its shelves were well stocked but starting to dry up by May. Surack shared that the company’s online sales of audio interfaces were up 28%, audio recorders up 23%, laptop computers up 90% and microphones up 253%. “Our overall sales are literally double what they were last year at this time,” he said.

The company’s sales are so brisk that Surack is in the warehouse filling orders himself, affording him a close perspective on what people are buying while sheltering in place.

“You can almost see what people are thinking across the country because they’re buying a whole podcast kit,” he said. “The next order comes through and the guy’s buying all new drum heads, six pairs of drumsticks [and] a drum beater. He’s clearly refurbing his drum set while he has time off.”

Reverb, too, is analyzing shifts in consumer buying patterns during quarantine, reporting an influx of new buyers on its platform driving spikes in acoustic guitar, synthesizer and keyboard orders. It further cited an increase in pro-audio orders among customers who’ve traditionally purchased guitar or drum gear on Reverb.

“This could indicate that musicians are using this time to experiment with new sounds or collaborate with other musicians virtually,” said Sebastian Fabal, senior director of operations and outreach at Reverb. “Searches for MIDI keyboards and drum machines are also seeing search spikes of more than 100%, indicating that consumers are making electronic music and experimenting with beats.”

The internet has an amazing ability to make the world a smaller place. Tony Meeks, owner of instrument stand manufacturer Zither Music Company in Brenham, Texas, is seeing this first-hand. He said his international sales have more than doubled during quarantine, with the company selling and shipping product to Australia, New Zealand, the United Arab Emirates, Singapore, France, Canada and beyond. “We [shipped] a saxophone stand to Budapest, Hungary, and the guy [who] bought it spent $200 to ship a $200 stand,” he said. Zither’s sales were up 50%over 2019 in March and 48% over the prior year in April. The company was set to hit this same growth rate in May.

All of this having been said, serving an online customer base during quarantine is apparently no cakewalk. Mantova’s Two Street Music’s Grimaldo emphasized patience. “With this Covid thing and people being locked down, you’re dealing with a lot of different attitudes and just frustration because people just want to be out doing things and so they’re taking it out on you,” he said, relaying a story of a particularly difficult customer.

“He started cursing at me and saying the most ridiculous things that you should never say to another human being. And so I called him, and I asked him, ‘Hey man, what’s the problem?’” The customer initially refused to say, but when Grimaldo pressed on, asking him whether he had an underlying issue, the customer admitted he was stressed out by Covid-19 and going through a divorce as well, and apologized. “The biggest thing is just being patient with everybody right now because there’s so much chaos.”

Regardless of such hiccups, Grimaldo feels online sales in MI have fully arrived and would like to get the store to where it could fully rely on them if it had to. “The e-commerce world that we’re going into, for people to deny that evolution is… not ridiculous, but that’s where we’re going,” he said. “There is going to be the time where we’re going to have this exodus of the storefront. It’s just not going to be a thing anymore and it might be sooner rather than later.”

Sweetwater’s Surack concurred, pointing to how customers have become more comfortable than ever before with grocery delivery while in quarantine. “I know some of these folks are never going to go back to stores on a regular basis,” he said.

Reverb points out that the pandemic has not only increased consumers’ reliance on online sales, it has made them more confident and comfortable buying anything they need online. “Even as stores start to reopen, I believe consumers will continue to rely on online shopping more than ever before” Fabal said. “In fact, NAMM is estimating that as dealers start to reopen, they should expect in-store sales to be less than a third of what they were prior to Covid-19 due to cautious consumers and various measures that must be put into place in-store to keep consumers safe.”

Not everyone is fully convinced. “There will always be some folks [who] will want to touch and feel a product before purchasing,” said Chris Tso, vice president of merchandising and marketing at Full Compass Systems in Madison, Wisconsin. “There’s no substitute for that tactile experience.”

Third Rock Music Center’s Gammon feels the increased role online sales have played in the store in quarantine will be permanent going forward, but not at the expense of the store’s identity. He said online sales are not “going to replace what we do best, which is hand-to-hand combat in the store. We’re trying guitars, we’re talking about woods and instruments and pickups and romanticizing the instrument [in a way] that can only best be done face to face. But do I see this as an additional form of revenue for us going forward? Yes, I do.” MI