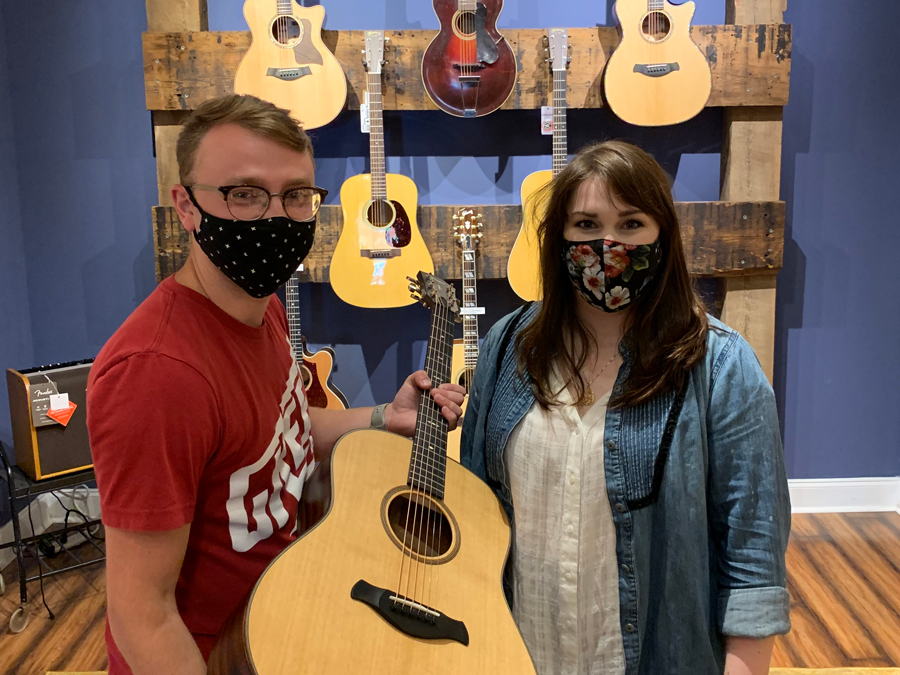 Employees of Spicer’s Music show off their masks.

What the U.S. will look like during the coming months and years has become a mystery due to the coronavirus pandemic, but MI retailers are preparing for hard times and technological changes.

Reopening the country as coronavirus continues in the U.S. and beyond comes with uncertainty. It looks different for every state, and in some states, every town. Businesses in New York City are exercising more caution than rural areas, causing anger, jealousy and potentially rash decision-making from urban retailers. The reopening process also brings worry to this for many. Two longer-term concerns are looming over retailers: What do we do if there’s a second, deadlier wave of the coronavirus? Will retail ever look like it did before the pandemic?

Health experts, like Dr. Anthony Fauci, who has become a household name and the face of the fight against the coronavirus in the U.S., are actively expressing concern about a deadly second wave of the virus in the fall, which may coincide with flu season. To combat these worries, many states and industries have created phased reopening guidelines.

In California in May, Governor Gavin Newsom announced that the state will retain its shelter-in-place order until the end of the summer. Meanwhile, some states never shut down. It’s a frustrating, but necessary reality for retailers in more populated areas. Saied Music Company, a music store chain with a total of six locations in Arkansas, Oklahoma and Texas, is one of the businesses that was able to keep its doors open. By May, Saied’s School Music Director Kim Koch felt like things were nearly back to normal.

“When you talk about reopening, we’re fortunate in that one. The numbers have not been as severe in Oklahoma, and we’ve not been as restricted,” said Koch. “We just haven’t had the restrictions of other places in the country. I think things have ramped up pretty quickly as things have been reopening. We’re in the middle of phase two right now here in Oklahoma. So it puts us in the third week since the official reopening of the community, and it just feels like things are getting back to normal pretty quickly here.”

The reopening guidelines are not without criticism. Koch, believes that some of the more cautionary measures are not completely necessary and will negatively impact the economy, fearing overreaction more than the coronavirus, especially the region her company operates in. Instead of national guidelines, she’s an advocate for decisions to be made by regional and local legislative bodies.

“My own belief is, I’m more concerned about overreaction than I am about the virus itself,” Koch said. “Thankfully, we see all of our leadership pushing decisions down to the local and district level. And so I think what we are going to see is that smaller and rural schools are just going to go about their business and do what they want to do. I think we may see more restrictions in the bigger districts and the more urban areas. These bigger districts have to look at their neighboring districts, and they’re all having to make decisions together.”

Preparing for a Second Wave

Other retailers are less optimistic about the future of the virus. Tim Spicer, owner of Spicer’s Music in Auburn, Alabama, has been wary about multiple waves of the virus since it first came to the U.S. last winter. In preparation, he’s trying to juggle saving money to keep the company afloat without cutting any of his staff.

“One of the things that we’re not doing is trying to reduce our staff hours and incomes if at all possible, at least for our core team,” he said. “I want our core team that has been invested for years to continue to be invested when we come out of this thing. So it’s been difficult to get creative on other ways to cut costs.”

According to Spicer, one of the first places people look to cut when faced with less foot traffic and, therefore, revenue is marketing. “But, unfortunately, that’s kind of a double-edged sword,” he said. “You need the marketing to get new customers in and get your name out to more people to get revenue.”

For densely populated areas, there’s almost certainly going to be more trepidation about returning to normal life than in rural areas. Cities like New York and Seattle lost hundreds of people to the virus in a couple of months. Steve Koenig, vice president of research for the Consumer Technology Association, which puts on CES, believes that for the majority of people, going back to normal will be a slow process, doubly so if those areas get hit with a second wave.

“I don’t think we’ll ever regain the former pace of retail [foot traffic] we had prior to the crisis,” said Koenig. “I think a real positive possibility as time goes on is just fatigue with all the PPE; basically, having [to] mask-up and glove-up every time you want to go out and get something. I think a lot of consumers are going to stay on the sidelines until requirements fall back.”

The second wave also poses a looming threat over the musical product industry because of potential school closures. Band and orchestra rental programs make up the bulk of revenue for hundreds of retailers across the country, and a missed marching or concert band season will challenge those businesses. For Koch, she’ll be watching the news and creating flexible plans during the lead-up to the school year.

“We’ve got our ear to the ground listening to our directors, following local news media, following the Oklahoma Secondary School Activities Association website,” Koch said. “And nobody knows. We’re just like everybody, I don’t have an answer. Nobody has got an answer, but I will say that in Oklahoma, I am very optimistic, and in Texas and Arkansas too that we have rental meetings on the book.”

Fall and early winter are also typically when the largest MI conventions take place, such as PASIC, CES and The NAMM Show, putting the companies that run these conventions, and the businesses that rely on them for survival, in an uncomfortable position. CES, scheduled to take place in Las Vegas, Nevada, from Jan. 6-9, 2021, recently added a banner to its site proclaiming that the event will still take place. The event staff claims that there will be limited touch points, more live-streamed content, virtual events and more. Realistically, it will be difficult for these massive conventions to claim these events will happen until we get closer to the time when a second wave might occur.

Make a Habit of It

Whether or not we see a second wave is uncertain. One certainty, though, is retail will dramatically change, even after a vaccine is available. The first wave has forced consumers and retailers to alter their habits and form new ones in the process.

“One of the things that we’ve been seeing, related to technology, is the health crisis has accelerated many trends that were preexisting to the crisis,” Koenig said. “This includes things like using drones to deliver packages. The health crisis has pulled that forward, [as well as] robotic delivery [and] contactless delivery for food.”

Another aspect of the retail experience rapidly advancing is how we make payments. Since the spread of the virus began to impact the U.S., many stores and tolls have asked customers to pay with a card or a digital wallet such as Apple Pay to stop the spread of germs.

“I think a lot of change is coming to the checkout counter and what that looks like,” Koenig said. “We’re going to see just a ton of innovation. The health crisis has given a whole new meaning to the term dirty money. We’ve been stepping towards [the] digital wallet, and the health crisis is just going to give that a quantum leap.” MI