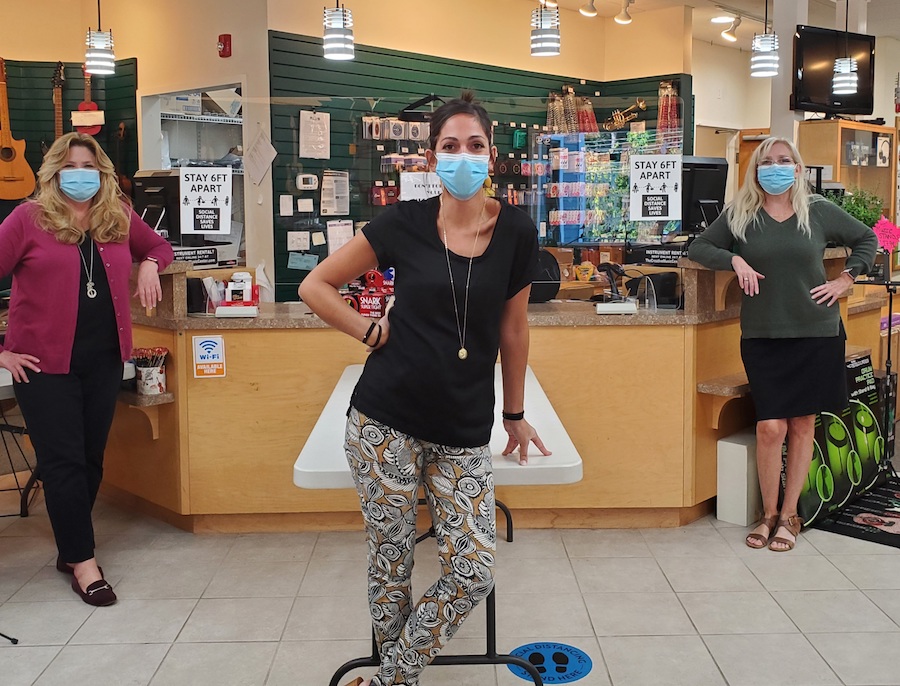 One Day at a Time

As it has for so many band and orchestra dealers around the country, the coronavirus has upended Monroe, Connecticut-based dealer Creative Music Center’s entire business model. Under normal circumstances, band and orchestra is a financially safe sector to operate in compared to other sides of the musical products industry. If there’s school, there are students who need instruments. Period. But, what if there isn’t school? It was an unfathomable question up until March. Suddenly, though, a rock-solid business model began to crack.

“‘Uncertain’ is the only word that comes to my mind to describe this year,” said Jeanne Curtiss, education representative of Creative Music Center in Monroe, Connecticut. “Everything was uncertain, down to the day. There were times at the beginning of the [school] year where we didn’t even know when schools were going to start, let alone if they were going to have band programs.”

In the early days of the pandemic, last spring, when schools were rapidly trying to convert to online learning and not much information about the virus was available, Curtiss frequently spent her days driving around Connecticut delivering instruments and accessories to teachers and affiliates. Several times, she even had to make the deliveries to their garages or front doorsteps.

“Who would have thought, first of all, that there’d be a pandemic, and second of all, that it would hit us in a way that was so out of our control,” said Curtiss. “We always have this hidden niche in our business, where as long as schools are going, we’re OK. We may pick up business here or lose business there, but for the most part, we’re good to go, and with this, no one saw it coming. There was nothing we could do except do our best and bear it as best as we could.”

As a smaller band and orchestra dealer, Creative Music Center didn’t have the luxury that comes with owning multiple stores in different states like some of its competitors do. While larger companies could shift their attention and efforts toward locations with less COVID-19-related restrictions, Creative Music Center had to stay local and focus on what it could do within the restrictions placed upon its community.

“Here in Connecticut, we had to shut down,” Curtiss said. “But unlike some of our major competitors, national companies that got to rely on other stores in areas where schools weren’t shut down, because we’re private and only here, we couldn’t do that.”

So, Creative Music Center adapted, beginning with scheduled curbside pickup. Curtiss forwarded all calls from the store to her number and set up to work remotely as the store was closed, all to keep servicing schools. “At the time, schools were going, virtually, and band was still happening, and the last [thing] we wanted to do was leave them high and dry,” she said.

As the 2019-20 school year ended, there was one positive note, though. Fewer customers returned their instruments. Curtiss attributes parents renewing their kids’ gear to the indecision of how the summer and the upcoming school year would play out, something no one seemed sure of.

Fast-forward to the end of summer, and the uncertainty was still growing as the first days of school approached. Rather than preparing for the year, Creative Music Center staff had to wait and watch the calendar as the new school year got closer, unsure of how, when and if school, let alone band, was going to happen. Kate Rich, vice president and general manager of Creative Music Center, recalled waiting until early August before having any idea of what to expect next.

Even once schools were up and running under different plans, uncertainty remained. Some schools still didn’t have an answer to the question of if band and orchestra programs were going to happen. Others had to unexpectedly close their doors because of cases of the coronavirus, making a stressful situation even less navigable.

“One of the schools was delayed a week or two because one of the teachers got COVID during the professional development days,” Rich said. “Pretty much every day, or every other day, there’s a school with a case of COVID, and most often, if that happens, there tends to be [a] closing the next couple of days. Then, there was a school that had a case of COVID and didn’t shut down at all.”

Rich also noticed a lot of staff changes at schools. Due to the virus and the frustrations and pressure it has put on school systems, teaching became less desirable for many. “More people are retiring, changing districts,” she said. “Some don’t want to be in schools because of COVID. That’s an underlying current going through the system, especially around us.”

In her role as an education representative, Curtiss interacts with directors and administrators daily, and she sees the toll that the restrictions are taking on educators. Many are having a difficult time with hybrid teaching, a combination of online and in-person learning, sometimes at the same time. For many teachers, it’s not like anything they had done before.

“It’s out of the norm,” Curtiss said. “The restrictions of in-classroom distancing, that’s not the issue. The issue is how to manage a classroom of ten people in your face and then handle a classroom of sixteen online from a computer. Trying to do both at the same time is difficult.”

Normally during the fall, Curtiss is in full-on traveling mode, driving all over the state to deliver supplies and help teachers and affiliates in any way she can, and no day is ever the same. Some days, she’s working with schools that rent privately with the store, and others she might be helping a school for low-income students that rents hundreds of instruments and then distributes them to kids.

This year, Curtiss is traveling less, and requests for help are coming in slower and more sporadically.

“Requests are still coming in, but much slower,” Curtiss said. “Schools are just getting orders and programs together.”

Creative Music Center is also fielding many requests for new, unfamiliar, pandemic-related accessories. “We have schools that are looking for bell covers and the bags for the woodwind instruments she said.

These new products are proving difficult to stock, too, according to Curtiss. Before the pandemic, many of them were in much smaller demand or didn’t exist at all.

If there’s any prevailing product in the coronavirus pandemic though, it’d be a toss-up between percussion and string instruments. According to several members of the Creative Music Center team, multiple schools in the area are putting emphasis on these airless instruments in order to reduce the chance of spreading the virus. One district in Connecticut took it to the extreme by only allowing students to play instruments under either of those categories.

“It’s only one district out of a lot, but from a band director’s point of view, I almost feel bad for them because you’ll have so many kids playing percussion instead of a balanced band,” said Rich. “But there’s nothing balanced about 2020.”

That lack of balance has created a mixed bag full of anxiety and confusion for teachers, administrators and students, as well as for industries built to provide them with supplies, including instruments, and there seems to be no sign of the virus letting up. For now, though, Creative Music Center is continuing to do what it has done since March, take it one day at a time and try its best.