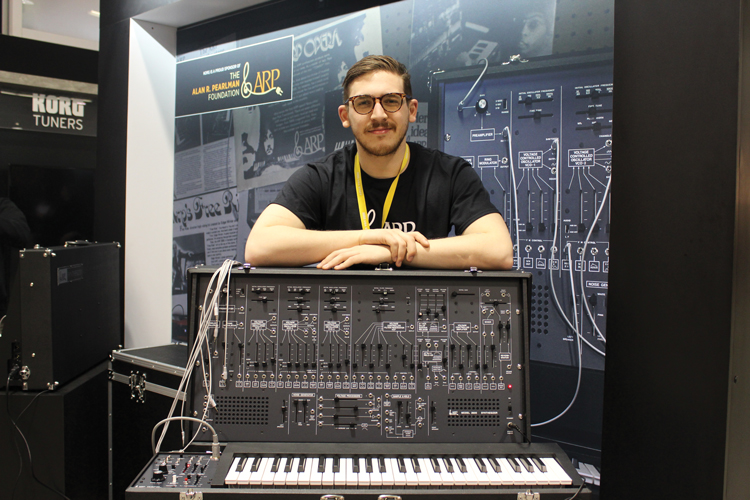 How to get into — and sell — the wild world of modular synthesizers.

When most people think of modular synthesizers, they picture rows of massive, science fiction-looking, blinking machines with patch cables crisscrossing every which way around their surfaces. Back in the ‘60s, that’s exactly what they were, but today, modular systems are more compact, intuitive and customizable. Now, modular isn’t only for the academics, it’s for everyone, including retailers.

In the past few years, modular has become much more accessible, in part because of the increase of affordable semi-modular synthesizers — synths that can be played without patch cables, but allow for patching to rewire the signal path of the instrument — like Korg’s MS-20 Mini, Moog’s Grandmother and Matriarch and Arturia’s MiniBrute 2. Additionally, several new semi-modular synthesizers have been shrunk down to space-friendly desktop sizes like the Moog Mother 32 and DFAM, Behringer Neutron and Make Noise 0-Coast.

YouTube has proved to be another modular interest generator. Videos of aesthetically pleasing modular systems, placed in front of serene backdrops, playing calming music or performing works by Claude Debussy can bring in hundreds of thousands of views, with comment sections full of people falling in love with this unique way of making music.

Why should a retailer consider getting into the wild world of modular synthesizers? For starters, it’s a growing product category with a blossoming scene of die-hard fans and boutique module makers. According to Justin DeLay, director of category and product marketing at Reverb, much of the growth in interest is due to a noticeable trend of guitar players picking up synthesizers and then, after some time, going full modular.

Reflecting on his transition from guitar player to modular synthesist, DeLay illustrates how the crossover between products can happen. “I remember so clearly sitting in my little practice space down on the floor, with my guitar flat on the ground, just droning, while I [was] twisting [guitar pedal] knobs, you know? And I thought ‘I think I’m more of a synth player.’”

Similarly, Eric Fox, owner of Foxtone Music in Minneapolis, got into selling modular after noticing that it was just a few years behind the boutique pedal scene.

“When I came across the modular scene, I remember thinking that [modular] was exactly where the guitar pedal market was 10 years prior and look at what happened there,” he said. “So from then on, whenever I would sell out of Fender Stratocasters, I would just order more synths.”

Pedal companies are taking note of the crossover as well, with some of them, most recently EarthQuaker Devices with its Afterneath module, making modules out of pedal designs.

“Synth nerds and pedal nerds get along quite well,” said Cory Juba, product manager for EarthQuaker Devices, at The 2020 NAMM Show. “I think understanding the potential of control voltage opened up a lot of doors and possibilities. With control voltage, the Afterneath really became more of an instrument than an effect.”

Beyond pedals and semi-modular systems, part of modular’s rise is due to increased interest in electronic music.

“If you have an MI store, you need to pay attention to electronic music,” said Fox. “People who are using GarageBand or Pro Tools are already dabbling in electronic music.”

Stocking modular is different than any other type of instrument category due to its piece-by-piece nature, so it’s time to start studying. It can seem complicated and overwhelming, with all the talk of electronics, thousands of individual modules and jungles of wires. Luckily, we have the internet, and many great, easy to understand guides on everything you need to know about voltage-controlled oscillators (VCOs), control voltage and signal paths, as well as the many mysteries of these systems.

There are several formats of modular, the most popular being Eurorack, specified by Doepfer Musikelektronik in 1996. Euorack is like Lego. You take individual Eurorack modules and connect them via patch cables to make them interact with each other. Like Lego, it takes the right pieces, patient building and vision to build something great, but it’s incredibly satisfying and personal once you’ve done it.

Most stand-alone modular systems have at least one VCO, one filter, one envelope generator, a voltage-controlled amplifier, an low-frequency oscillator, a variety of other effects and a case. System size, measured in rack units as the height (abbreviated as U) and horizontal pitch (HP) as the width, varies from user to user.

The module company 2hp, for instance, makes lunch box-sized cases that can hold up to 42HP and 3U, which is considered incredibly small and portable, and other companies manufacture 420HP, 9U systems or larger.

Additionally, there are companies like Synthesizer.com and Doepfer, which offer complete modular set-ups. However, most users prefer to mix and match modules from different brands to create their perfect, custom system, which is made easier by free simulation sites and applications like VCV Rack and ModularGrid.

This is the fun part of modular; building the perfect machine for your musical desires. Do you want a versatile, jack-of-all-trades synth? No problem. Are you interested in experimental sound design? Perfect. It’s impossible to stock all these modules, but what retailers can do is research popular brands and modules via sites like Sweetwater, Reverb and the aforementioned ModularGrid and start stocking.

With some modular specifics sites and forums though, its easy to get overwhelmed by the high-level questions and discussions. Fox recommends following the press around, or attending several of the large synth events that happen all around the country.

“There are large synth events like Moogfest, which unfortunately is not happening this year because they’re on break,” said Fox. “Also, there’s Synthplex and Knobcon, which [are the] other big ones in the fall.”

Once you’ve done your research and decided to enter the market, it’s time to face one of the most difficult challenges that both retailers and customers will face — the start-up cost. Unlike other synthesizers, a modular synth’s power supply and case are often sold separately and can be pricey. For retailers who may not want to dive into the deep-end right away and eat the cost, semi-modular synthesizers are the answer.

“You got to buy a case, you got to buy your power supply, you got to get four different modules to really get up and running,” said DeLay. “What we see is really popular [on Reverb] and valuable is stuff like the Moog Mother 32, DFAM, the Make Noise 0-Coast. [These are synths] where you can kind of get that first taste of [modular].”

For retailers that may already stock semi-modular gear and are looking toward filling up their shelves with modules and building multi-row racks, the prices and number of brand names can be intimidating. DeLay suggests treating it like the guitar pedal market.

“You have to buy used on this stuff,” he said. “The pedal analogy is so apt. What we see on Reverb is people just constantly buying, selling and flipping used pedals. Well, Eurorack is exactly the same thing. It’s a module a month, right? [As a player], you’re just constantly moving things around. For retailers looking for a way to get in, I would suggest [saying] that you’re open for business, that you’ll buy used modular stuff, build an inventory.”

So, you’ve done your research, assembled some modules, and now, how do you get foot traffic? It’s easy: Set up a big, blinking rack, patch it up and let the crowds get curious.

“What I love about modular actually, and I think it’s a good opportunity for retail, [is that] so much of [its appeal is] that you have to have to put your hands on it,” said DeLay. “I think there’s something really impressive about walking in and seeing a large multi-row rack. [People are just going to] walk up and stare for a little while because it’s just so visually opposing. If you build a monolith, they will come.” MI