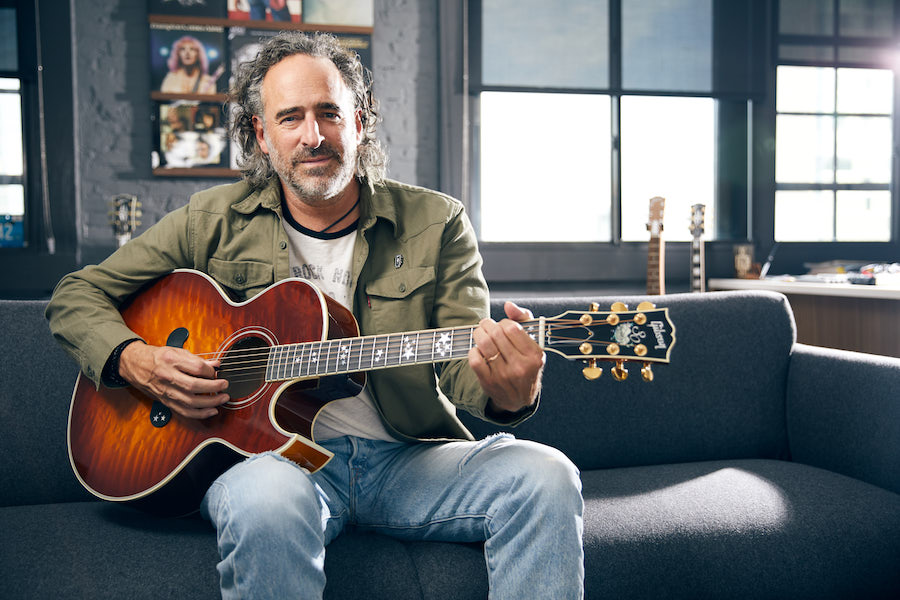 Fun fact: “I have an identical twin brother. People don’t believe it until they actually see him. I’ve used that in certain situations for a lot of fun.”

I start my day the night before. I value sleep, and I think that sleep is probably the most important way to start your day. If you can actually get a good night’s sleep, you set way better conditions for how to be fully engaged the following day.

What was it like as the pandemic unfolded at Gibson?

The first thing we did at the early early stages was we implemented twice daily leadership briefings. This was even before the heat of COVID, like, “OK, there’s something happening.” So we did an 8:30 a.m. morning briefing and a 5:30 p.m. evening brief with the leadership team. That worked really well to make sure we were consistently in communication on key issues. [There] was this notion of, “Oh, we might be remote for a week or two. We’ll check in, and we’ll set things up.” And then, about three weeks into it, we realized [we needed to] plan for a longer term remote engagement. We were staring down an unknown supply picture in terms of our factories shut down and clearly an unknown demand situation with 90 percent of dealer doors shut. And that wasn’t just in the U.S., that was around the world. Our mantra [became]: Plan for impact, prepare for opportunity. We started seeing that the week before each month, we could actually plan what guitars we were going to make and what dealers were going to be open, and whether that was online, etc., and then prioritize accordingly.

On March 22, Gibson operations in the U.S. temporarily closed. What was that process like for the company?

In some ways, it was the logical conclusion of a pandemic that was unknown but affecting individuals. And so we had, quite frankly, a community, corporate and human responsibility to take the right measures, to put safety first. We were very close to the mayor’s council and advisory council, the governor’s council in Tennessee, and, of course, all of these different things going on around the world. So when they said, “We’re going to put these guidelines in place, and here [are] certain mandates, here’s what we believe is in the best interest of protecting individuals, but also balancing the dynamics of business,” we were right in lock-step with those guidelines. The day that the mayor defined the guidelines, we were in sync with that and shut our factories down the following day. On the day of [the] shutdown, I made a decision to pay every employee a thousand dollars immediately. We just thought it was the right thing to do.

We were able to put a skeleton crew in place to keep things in motion, and in motion means, it sounds simple, but preserving the quality of our wood, making sure that guitars that were in works in progress were actually getting completed so that you could actually guarantee the quality of the guitars coming out of the factory. So we put a base-level crew in phase one, and then about four to five weeks later, phase two opened up and we went to about 50 percent capacity. That’s both in terms of output [and] also in terms of just people coming back to work. So if you have a factory that’s got a hundred people in it, we were putting 50 people in it and meeting the guidelines. And then more recently we’ve opened up our factories in Nashville. We have two factories there and in Bozeman, [Montana], as well, and now we’re fully operational, but pay very close attention to the day-to-day dynamics of COVID. And we still have [a] daily protocol, temperature testing, masks, put up [plexiglass] in areas. We’ve understood how to zone our areas so if there’s an isolated incident, we can get to it quickly. So far, the team has been amazing, and not only in terms of meeting and exceeding the protocol, but also just in terms of getting the right balance of, “Yes, my company [is] helping to keep me safe, but I also know that our guitars are in demand and let’s make some guitars.”

How have sales been during the crisis?

It’s all relative. Clearly, they’re not what we would have expected without the crisis. You’ve seen the journey we’ve been on for the last year and a half, almost two years. We came out of Winter NAMM with a high level of confidence [and] earned trust back from our dealer base, from artists, from the industry saying, “Wow, Gibson truly is back and they’re setting the right conditions for success, and they’ve got real momentum in the market.” That’s very measurable through sales, through market share, through all of the other metrics and qualified comments from the right folks. So, fortunately, we had momentum coming into this. And every guitar we make today, we can sell. We’ve got probably about four to six weeks back orders that we’re trying to fill fast and we’re in a good situation. We’re better than we thought, but not where we would want to be.

You’ve characterized Gibson as a 125-year-old startup. What’s an example of that notion influencing a process for the company?

If you were a massive corporation [and] you had the investment [in Gibson], you’d come in and you’d really look at engineering and quality in maybe a different way with automation, etc. Well, a 125-year-old startup would look at it in simple terms. In our factories, we had inherited challenges with quality, and we realized it was three essential things. One was we weren’t managing the dust in our factories properly. We had this imbalance of negative and positive air pressure. The 125-year-old startup declared a war on dust in [its] own factories. We eliminated 90 percent plus of the dust that was floating around the factories through way better dust extraction, air pressure dynamics, chambers being set up. The other one was, we just had imbalanced lighting in all of our factories, different levels of brightness. You could actually see different dynamics that were taking place on the guitar. So we completely revamped our lighting. And then we set up a much more sequential approach to our assembly where the individual who passes the guitar on is responsible for passing on a perfect guitar. If it isn’t perfect, the other individual doesn’t have to receive it.

The Gibson brand is huge. How do you approach honoring and innovating with it?

The question I get asked most at every level, whether it’s dealers or journalists or just people I meet on the planet, [is], “Hey, JC, don’t go changing anything, you should go back to the past and what made you famous,” and then they go, “But what’s new at Gibson?” Trying to answer [that] is literally the crux of our leadership challenge, in a great way. So now our guitar collections are set up around Gibson Originals, which will always be true to our historic past, and then we have Gibson Moderns, which truly allows us to start innovating in and around the guitar. So if you’re a modern guitarist [and] you’re looking for more modern features, whether that’s an asymmetric neck or weight relief or you’re OK to actually look at different configurations of electronics and pickups and set-ups to actually help shape and create a different sound that maybe hasn’t been thought of, our collection of architecture allows us to be true to our past with our Originals, but lean into innovation with our Modern Collection. And we’re going to do that across all of our brands.

What does it mean to you to see a Gibson guitar in a musician’s hands?

In some ways, it’s very natural and in other ways it’s awesome. It’s honor and pride for me. I did very little in my two years to create the heritage and the authenticity it gives them, but what we can do is rear in the trust with the artist base. Let’s face it, Gibson, I think people have always loved the brand, but they didn’t always like the way that Gibson was, quite frankly, running things. And now when I see a guitar from an artist, whether it’s a new guitar that we created and built and made with an artist or it’s a vintage guitar that the artist has, it just shows you that [for] every ounce of energy and creativity and attention to detail, the moment of truth is not what we say it is. It’s on that stage when that artist plugs in or starts to play and says, “I’m confident I’ve got the best instrument in the world to create the sound and style that I want to create.”

Are you a musician yourself?

I grew up in a musical family. My mother always played an Epiphone, up until a year ago, when I finally got her a Gibson with her personalized truss rod cover, but she’s still partial to her Epiphone, which is awesome. And my dad played banjo. The common denominator was bluegrass music. I played a lot. It was always my passion to play guitar in different bands and settings. And then the ability to sync that out with Gibson was just almost too good to be true in terms of if you could connect one of your absolute passions with your professional experience and bring it together. It’s a pretty good combination and it’s served us really well.

The area that I would love to explore if it wasn’t music is I think there [are] amazing things happening on the food scene. It’s just the way that food is being experienced [and] created. I think there [is] a whole evolution and revolution happening in the food and drink space to deliver levels of experience and engagement with the foundational elements that everyone needs every day.