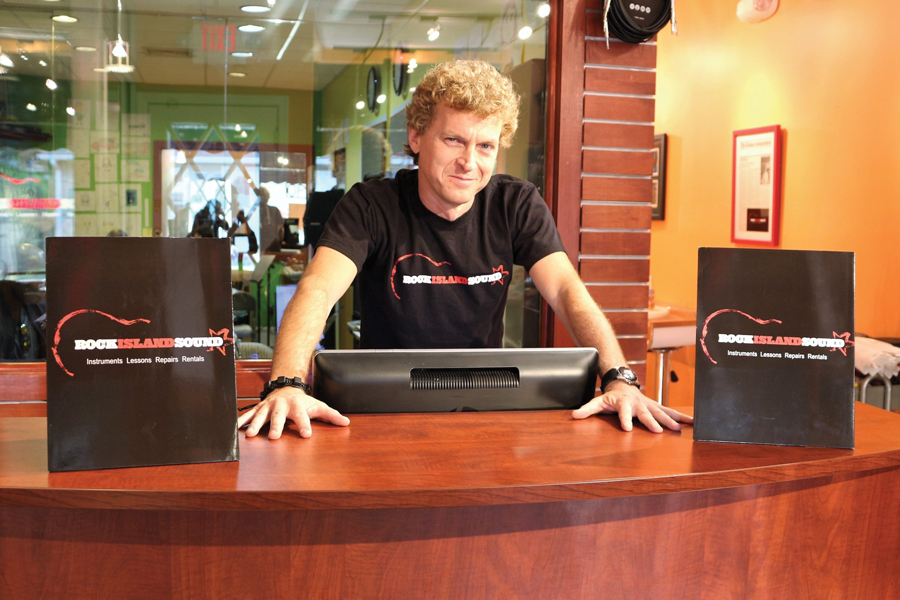 From The Ground Up

Paul Bessolo can’t remember a time when music wasn’t in his life. As a child in Argentina, his home was filled with the sound of his father playing classical piano every night, eventually inspiring him pick up piano too, as well as guitar. Music quickly became as much a part of his being as his DNA. From then on, his purpose became clear.

At the age of 22, Bessolo left Argentina for the U.S., and in 2002 he went and got his master’s degree in classical composition. To pay his way through school, he started teaching, all while juggling school and personal projects.

“We love what we do. I was lucky enough to be involved with music my entire life.”

“When I went back to school, I was teaching to make ends meet,” said Bessolo. “I’d go to school in the morning, teach in the afternoon, play in bands, do studio work and had my own projects at night. So for many years, I joked and said that the best restaurant in the world was my car because I had only had time to eat when I was driving between places.”

During this restless period, Bessolo was traveling to students’ houses for lessons and dashing around the northern New York City suburbs in his car. While he enjoyed the teaching, he knew the lifestyle was unsustainable. So, one day, when a real estate friend of his approached him about a store vacancy in Rye, New York, he stopped and thought about it. Noticing that the majority of his students lived in or around the area, he jumped at the opportunity and established the first Rock Island Sound in 2004.

“After I opened the shop, I’d say about 99% of my students from my time at teaching in homes followed me,” Bessolo said. “When we opened, I was teaching seven days a week, 12 hours a day. I always had my eye on getting bigger though. One day I hired one teacher, then another, and now we’re still hiring teachers and expanding. I hired a new teacher yesterday.”

As Rock Island Sound grew, Bessolo starting selling accessories for his students: guitar strings, tuners, drumsticks, pedals, etc. Then, he started stocking a few guitars, and then a few trumpets, and then drum sets until the store evolved into what it is today: A complete music environment for gear, repairs and lessons on almost any instrument imaginable including group and vocal instruction and occasional showcases in local venues.

Five years later, in 2009, Bessolo opened a second location in Tarrytown, New York. The expansion came just a year after the 2008 financial crisis, a time when many music shops were forced to close their doors. Despite this, Rock Island Sound weathered through and came out on the other side, further proof that the store’s organic growth, good business practices and deep love of the craft made customers want to keep coming back.

“We love what we do,” he said. “I was lucky enough to be involved with music my entire life.”

The most difficult part, he said, has been transforming himself from musician to businessman. “I feel like Jekyll and Hyde, but it’s the only way to keep a store alive,” he said. “It’s hard. You start as an artist and then once you start hiring employees, you have to start looking at it from a different angle. One day you realize you’re doing more business stuff than music stuff, but still try hard to balance those two things.”

Even after years of building his business, Bessolo claims that none of the hardship he endured compares to the difficulty of becoming more of a businessman than a musician and teacher for Rock Island Sound. It ’s a process, he admits, that has had its fair share of ups and downs.

“I had to learn by doing,” he said, relaying an anecdote in which an eBay sale of several thousands of dollars of guitars to a customer in Singapore led to the theft of the company’s credit card information and the loss of roughly $15,000. “I’ll never forget it,” he said. “Those are the best lessons. You can’t learn those lessons in a school. It took some time to get back on our feet, but we did it and learned something along the way.”

After years of near-constant advancement, including an ever-growing staff of over 20 instructors, Bessolo is still looking to expand, this time by setting his gaze on turning Rock Island Sound into a franchise with the dream of having the store anywhere and everywhere. He made it clear, though, that he’ll personally ensure each store maintains what makes Rock Island Sound home for all musicians.

“I’d love to start selling by January. We’re going to have operation manuals, training, lesson instruction, support and I’ll be traveling to all the new stores as much as I can. Even if that means going to all different states. We’ll get them up to speed quickly and teach them how to turn on the lights and open up the doors.”

Although he grew a business from the ground up, out of his car, survived economic perils and established a franchise, Bessolo remains humble. To him, it’s all about making sure to keep his love of the industry at the core of everything he does with Rock Island Sound. It comes down to keeping that in mind and always trying to better himself.

“If you love what you do, other people see that, and that energy flows,” he said. “I’m always trying to really think about what we do and why we do it and try to translate that to the people around me. We all have different journeys. I was just lucky enough to grow up with music and spend my life doing it. It makes me who I am. I always try to get better. I always try to grow the business. I believe in music.” MI