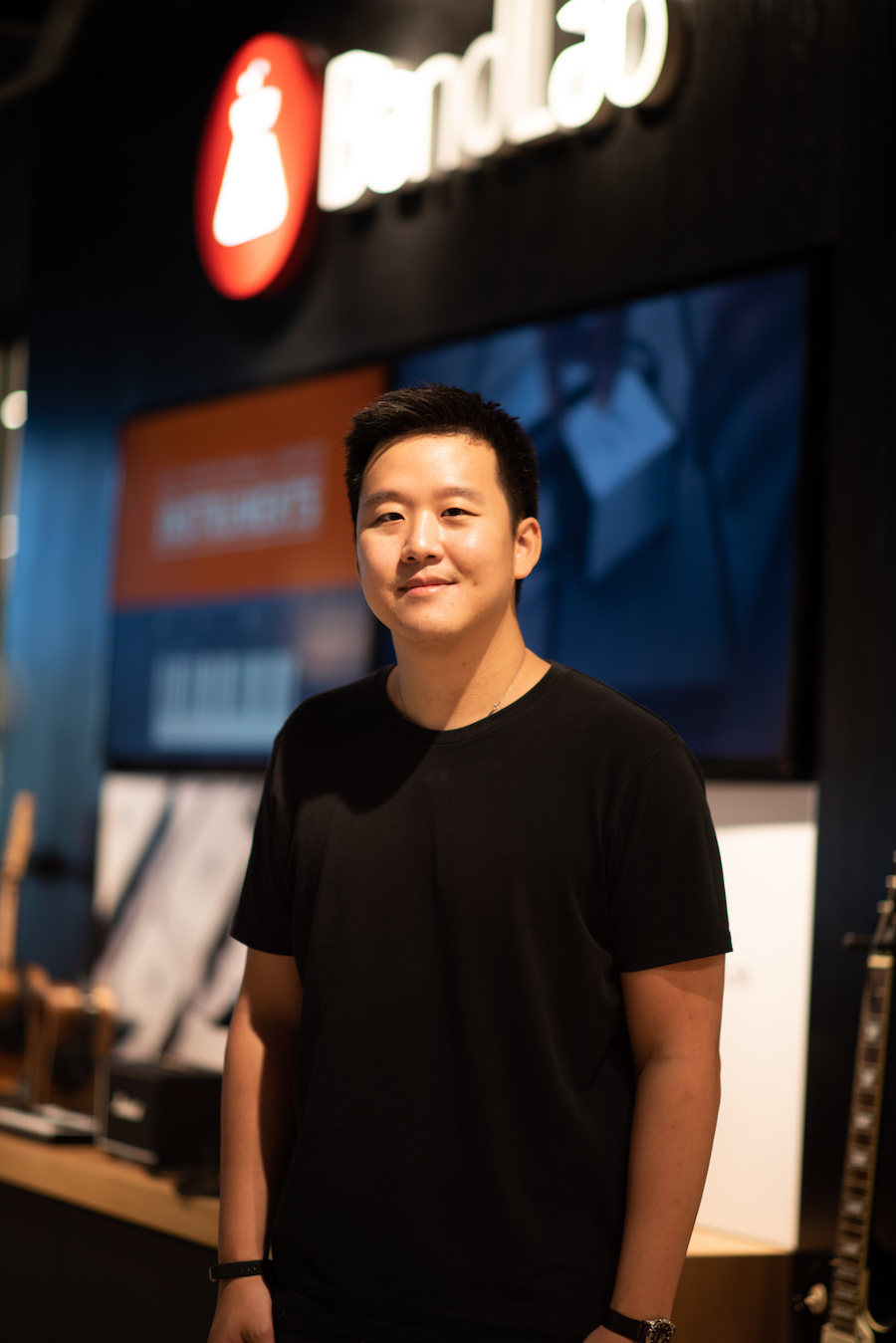 Fun Fact: “I am a huge chess fanatic. It was exciting to see a lot of people join the sport as a result of ‘The Queen’s Gambit.’ It’s been interesting to see a lot of people on chess.com, which is a platform I use as I’m standing around in queues. Chess is a lot of work. It’s very similar to guitar in that very quickly upon getting into it there’s a great shot where you think you’re slightly proficient, and then you suddenly realize that there is that much more to understanding and learning than you could possibly hope to know.”

Historically I haven’t necessarily been an early riser, as I’ve generally had to stay up pretty late for calls, but of late I’ve rediscovered a love for tennis. And so right now my day starts around 6 a.m., and I’m on the tennis court by 7 a.m. at least to be done before getting to the office at 9 a.m. So, right now that’s how I start my day every morning. I make the most of being in one place right now, which hasn’t been the case in a very long time.

What was the original idea behind BandLab?

Making music is not just about the tools, right? We work in an industry where so much of what we focus on is the instruments [and] the software that you use to make music. But we forget, and we took for granted, before the transition to the digital industry, that a lot of the interactions were physical. Through the transition to digital, not just through what happened with records, but the whole transition to digital also affected social interactions. Making music is much more than just having a great guitar or having software on your computer or a great DAW. It’s actually also having people to collaborate with, people to inspire you, people that you inspire or give you honest feedback on whether something is very good or is honestly very terrible, as a song. The easiest way to understand BandLab is it’s like Facebook for music, but with GarageBand and SoundCloud slash BandCamp built in. So it’s a place in which you can make music, as well as share music.

How did the company expand from there?

In terms of building a business, part of the challenge was obviously building the product, but also a huge part of the challenge was getting buy-in and getting people to understand what the vision was and what the product could be, because it wasn’t a product that you could just point at something else and say, “This is exactly what we’re building. We’re copying that.” This is something where being out here in Southeast Asia, actually a lot of the companies, especially in technology, a lot of the technology startups that you see generally have products that are mimicking or analogs of some larger platforms. Whereas we were something that was brand new, a new user behavior. And [we were] actually targeted at the U.S. and in different places around the world, as opposed to just our direct region. So at the very beginning, trying to go from zero to 1,000 users to 5,000 to 10,000, every idea is very much hypothesis, and then you’re building that out. Whereas, today, surprisingly, it’s actually gotten easier to manage, especially from a product perspective. Having gone into where BandLab is today, we have more than 33 million registered users around the world and more than 10 million songs a month being made on BandLab.

How does it feel to reach that many music makers directly?

A week and a half ago, we were the fifth app on the U.S. music iOS charts. We were ahead of GarageBand by a long way. We generally are ahead of GarageBand in most markets in the U.S., the U.K. and Europe. We’re ahead of Amazon Music, ahead of Shazam. We’re only behind YouTube Music, Spotify, SoundCloud and another streaming service. So, the fact that music creation can be up there with consumption is very exciting

BandLab is very active in the MI space overall, but what’s its core focus?

When it comes to what we do, there is still that focus on fretted. One of the questions we get asked very often is, why the focus on fretted? But I would actually say that if you look at it from an industry perspective, obviously fretted is a leading component of the market, but the other leading component that isn’t necessarily represented in revenue, but we are equally, in fact significantly more invested in, actually, than fretted, is digital music and creation. And that is something like BandLab. So, in some ways, the unique IP of what you create with BandLab is also a way of investing in fretted. Both have very different business models. BandLab can be given away for free. We definitely don’t give away guitars for free. [laughs]

Are you able to be directly involved in product development?

Product development is something that I’m personally extremely passionate about. I’m personally involved, but more ensuring that everything fits within the portfolio and that we are developing products that are representative of the vision that we want to bring brands back to life. For example, with Harmony, which is a brand that is very near and dear to many people’s hearts in the U.S., it is a brand that definitely did not have the reputation of high-quality, very fine guitars. It was a catalog brand at one point in time and extremely affordable, but what was beautiful about Harmony was the stories that came out of it. At one point, it was the world’s largest manufacturer of musical instruments. Bob Dylan’s first guitar was built by Harmony. “Stairway to Heaven” was written on a Harmony. It’s a brand with just so much history and so much incredible storytelling that’s associated with it. And we want to re-imagine it definitely not just to be junk guitars, like they were at some point in time, but take a lot of the character and re-imagine it for the 21st century now and what the brand would be if it had continued to be a leading manufacturer.

What’s a product you have on the market right now that you have a sweet spot for — that you might call your baby?

The Harmony Juno is a smaller body guitar was inspired by the Stratotone, so something that people are very familiar with. Ritchie Valens played a Stratotone on “La Bamba,” a green one, which is pretty iconic. Our Stratotone is a smaller body guitar, solid body, bolt-on neck. This guitar is just so inspiring as a model, despite it being smaller body. And I think that makes people discount it a little bit, which they really shouldn’t do because we design it to be comfortable.

Something that distinguishes you from most suppliers and manufacturers we talk to is you’re also a retailer with Swee Lee. Does that afford you any advantages in navigating MI?

It challenges us to be better at creating product or even being a great retailer. There is that challenge to make sure that you deserve to choose yourself as a partner. That isn’t necessarily the case in all our markets. I think the biggest advantage is the fact that on the retail perspective, we are direct to consumer, and really understand people as they walk in. When I first took over Swee Lee, the most important thing I personally felt I did was I spent at least a month, two months just sitting on the shop floor, serving people coming in. And if you understand the way people think about your business, it’s very different to the way you think about it when you’re in management.

Swee Lee was a distributor of some great brands in the industry — Fender, Gibson, Ibanez and related musical instrument, especially around combo and modern fretted, as well as percussion instruments. I saw an opportunity with this company to really modernize the experience. I’d grown up in and been lucky to live in the U.K., and experienced the change from physical retail to also online retail. In Southeast Asia, it was very fragmented and you had a very different kind of business model. You had distributors that still had some kind of retail, so they doubled-dipped in some ways, but they did it in a very box-moving mentality as opposed to really building a consumer experience. There was a consumer experience, but there also wasn’t one, if that makes sense. So, with Swee Lee, I took over that company, modernized it, brought e-commerce to the fore and created a consumer experience in our retail stores. We’ve expanded our distribution and today we represent over 129 different brands around Southeast Asia, Singapore, Malaysia, Indonesia, Vietnam [and] Brunei.

My perspective as consumer was I didn’t really — candidly — like the experience that I had at Swee Lee. I bought my first guitar from Swee Lee and bought nothing [else from it] until I had the opportunity to buy the brand many years later and take it over because it was very much that old school approach of MSRP, not messaging to people what the street price was transparently. Those things don’t work in a modern, digital, online, e-commerce environment.

It’s in Singapore. We have humidity problems, which are very different [from] certain parts of the U.S. Strings get rusty. A lack of commitment to changing strings meant that your experience trying these products was not the best on a $3,000, $5,000 guitar or even a $1,000 guitar. That’s a lot of money for people to spend on something to go in and feel that the strings are rusty. And then the prices are higher than you could see online at Musician’s Friend or Sweetwater. That’s not the best experience for a consumer. So [it was] understanding those things and then applying it to the way we thought about how we improve things. Part of leadership is trying to figure out what problems you have and constantly trying to make things better. If you can’t find things to make better then something’s wrong.

What do you enjoy most about operating in the media space, owning publications such as Guitar.com, NME and Uncut and more, and formerly Rolling Stone?

There is a huge responsibility of media to actually be out there helping artists tell the stories to help them stand out above the crowd and be able to champion people around the world. I think the NME in the U.K. has been a huge champion of everyone from Oasis to Blur to Radiohead to Muse to the Libertines to the Strokes. The thing that I enjoy the most is feeling that we’re a supportive part of an artist’s journey. The difference for us as a media operator versus other media operators is that we aren’t a publisher for whom music is a segment. We’re a music company for whom publishing is a segment. We understand the importance and the responsibility of that.