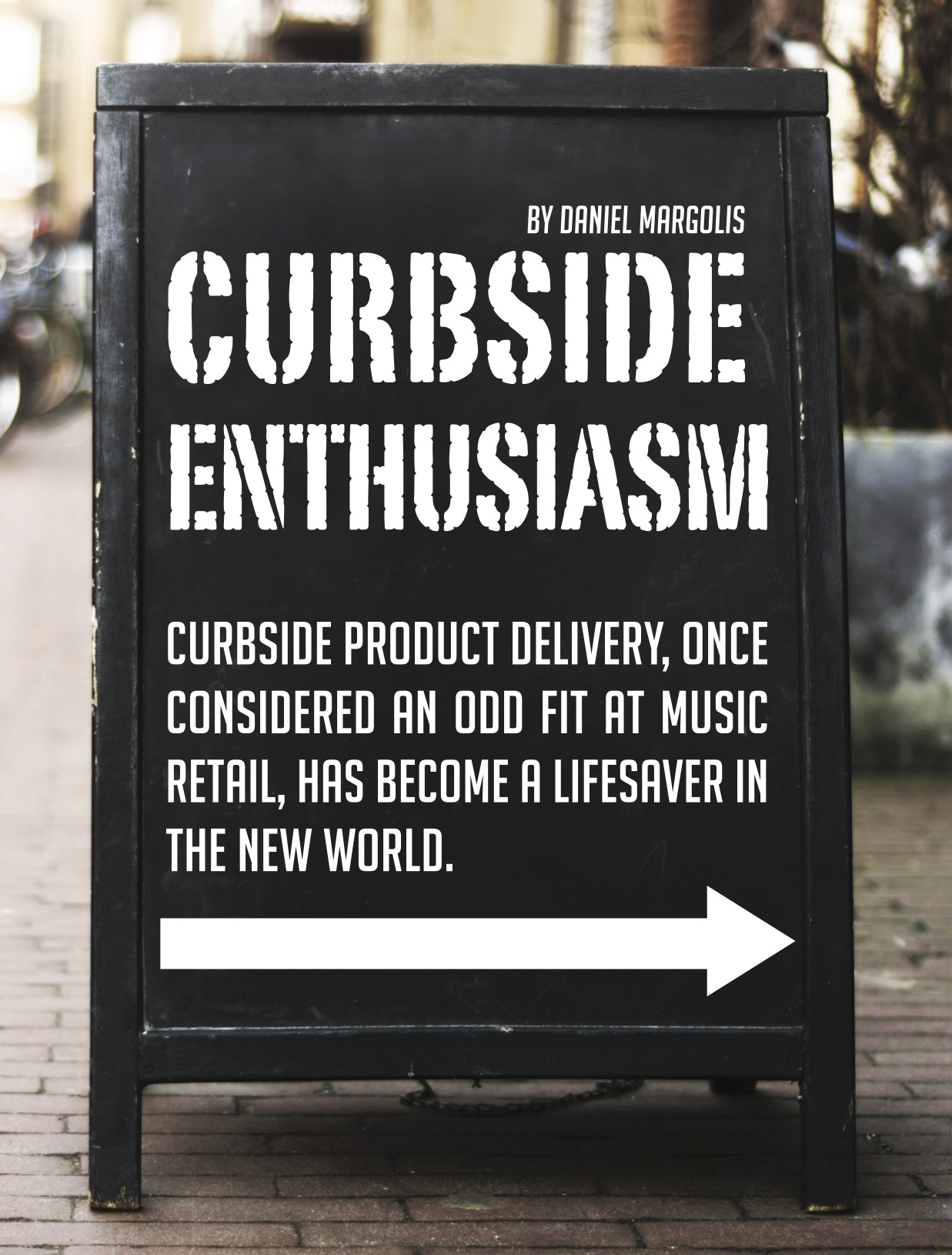 Curbside product deliveries based on online orders have generally been the domain of big box stores, and even there, it didn’t seem to be gaining much traction pre-pandemic. Not anymore. Today, curbside service has become essential for retailers, even in MI.

Mike Risko Music School in Ossining, New York, has embraced curbside delivery. The store wasn’t doing it before the pandemic but soon started. Miriam Risko, who co-owns Mike Risko Music School with her husband Mike, said that as soon as they started doing curbside, they realized, “Wow, why weren’t we doing this before?”

The first thing they needed to do was get the word out that the store was offering curbside service, advertising it on local websites and social media. The Riskos started fielding calls from customers, giving them FaceTime or Zoom tours of what they had in stock and coordinating and finalizing customers’ purchases. Then, the Riskos’ staff “would either bring it out to their car and put it in their trunk, or we would get them in the parking lot, or leave it,” Miriam said. “So, there was no contact.”

Coordinating all of this daily meant that the Riskos became like traffic coordinators. “We really had to make sure that we were scheduling these curbside pickups because we didn’t want to have too many people here at one time,” Miriam said. The store produced and posted an instructional video, as well as a “very big sign on our front lawn,” training customers on how to approach curbside pickup, to call or text the store from their cars when they arrived.

The Riskos had forwarded the store’s calls to their cell phones, offsetting their work-life balance. “We’re working around the clock now,” Miriam said, and Mike added, “Very old school, like 20 years ago.”

However, the Riskos also found that curbside allowed them to flex their schedule. “We don’t have as many retail hours as used to have,” Miriam said. “Somebody might call and say, ‘Oh, I can’t get there until seven o’clock.’ If [they’re buying] a pack of strings or something like that, we can leave it for them in the mailbox. And our new hours are better.”

This produces a delivery system similar to a reversed version of Amazon’s doorstep delivery, which can leave the product exposed for some time. But the Riskos aren’t worried about theft outside their store. “We have cameras on the building so we can monitor it if we really have anything outside,” Miriam said. “But people don’t generally steal Amazon packages, you know?”

Miriam described Ossining as not having changed much since it went under lockdown. “Our community has not awoken completely yet,” she said. “We’re still living this way, hiding out, which is why, I think, we’re able to keep going with this.”

According to the Riskos, the downside here is that it can place a barrier between themselves and their customers. “When they’re in their car with their mask on and their window rolled up, and just the trunk pops, it’s harder to have a regular sort of free conversation with them like when they’re in here,” Mike said.

The lack of face-to-face customer engagement has been a challenge for Adam Levin, general manager of Chuck Levin’s Washington Music Center in Wheaton, Maryland, as well. Beyond having to maintain “relationships with these guys through their car windows,” Levin said that sometimes customers go on the store’s site and accidentally order the wrong items, buy items without realizing they’re not in stock, or show up to get their order too early. “The order has to be processed,” he said. “It has to flow through the system. We have seven warehouses, [and] we have to go get the thing. So, for the ‘I’m in a hurry, I need it in five minutes’ customer, it’s not the best.”

Regardless, Levin said curbside has been an overall success for the store, which also was not offering it before the pandemic but realized about a month into quarantine that it’d have to start. He said beginning a curbside purchase with a phone call is fine, “but that’s not the clean, cool way of [doing] curbside pickup.” Washington Music Center built a curbside pickup option into its website, something Levin once felt was more the domain of big box retailers like Walmart.

The store arrived at “a pretty cool flow with the website,” though Levin acknowledged some initial speed bumps. “You don’t have some of the benchmarks of a secure transaction,” he said. “You’re not inserting the card into a machine. You’re not shipping the item to a billing address. So there [was] a broad list [of factors] we had to understand and mitigate in order to really do it appropriately.”

Once the website was settled, Levin and his staff just had to wrap their heads around curbside itself, which wasn’t easy at first. “To be honest, we had ideas, but it was not until the day that we started that it all clicked in my brain,” he said. With Washington Music Center located on a major road with free parking in back that people generally miss, Levin had a lot of questions about how it would work. “We ended up putting up a tent outside and having people outside the entire day to catch these people. Once we got into our groove [we] didn’t need as many bodies outside. We certainly became streamlined after about a week.”

After that, Levin began to notice people began making unusual purchases while at his store’s curb. “I’m still surprised when I see people buying 18-inch subwoofers these days, but they do,” he said. “Pro audio and the big live sound stuff, they’re doing that.” Levin said it makes sense, because social distancing may require volume. “People and churches and houses of worship are doing things outside and they need to get loud.”

Levin also said the first time someone bought a high-end guitar via curbside he was “stunned,” but that too made sense. “I’m thinking, ‘Man, who’s going to buy anything when the world’s ending?’” he said. “But they’re not going to the movies or restaurants or on vacation, and they want to stay entertained and stimulated. Music is an outlet.”

Still, Mike Risko pointed out doing this curbside felt somewhat odd. “People would buy a guitar for $699 and want me to leave it outside. That was surprising,” he said, as Miriam laughed.

Musical Innovations in Greenville, South Carolina, is one of the few stores that offered curbside service prior to the pandemic, starting it up a year ago but not making much use of it until March. Still, according to owner Tracy Leenman, this early adaption, initially offered “as a convenience for families,” came in handy when her business could only offer curbside sales from April 6 to 24. She joked that the only real adjustment she had to make to increase curbside service was, “We bought a lot more clipboards.”

As one of NAMM’s Top 100 Dealers from 2013 to 2019 and NAMM Top 100 Dealer of the Year for 2015, Leenman finds Musical Innovations’ style a bit cramped by curbside. “We really pride ourselves on our customer service, and it makes it a lot harder when somebody is sitting in a car and we’re trying to hand stuff in and out of a window,” she said. “The salespeople have to struggle to meet people’s needs and and stay positive, and it just adds a lot of logistical problems.”

She pointed out a particular problem headed our way that is going to put curbside to the test — winter.

The Riskos are eyeing this as well, especially since they’re based in New York. “We’re going to be faced with some weather challenges in the next few months, and it’ll be interesting to see how we can pivot there and still continue to use the parking lot,” Miriam said.

And it’s not just the cold challenging curbside delivery. It’s also the threat of natural disasters. “We had a hurricane last week, [and it was] pretty bad in this town, and so we couldn’t do anything outside that day,” she said. Of course, in winter you start to lose daylight as well, all of which makes Mike Risko Music School want to max out curbside while it can.

“[When] it starts getting dark at five o’clock, no one’s going to want to hang out in our parking lot,” she said. “That [creates a] level of anxiety of ‘Let’s do this now, all we can before it starts to [get] cold and dark early.’”

So, for now, that’s exactly what the store is doing, treating its lot like an expanded version of its store, setting up guitars for customers to shop in the lot, replanting flowers and hosting socially distanced live music — the staff has a band. It plans to convert the lot into a holiday village come November, so there’s no way cold and snow are going to kill all the fun.

Such innovations are key right now, something Leenman stresses. “We try really hard to be as flexible and malleable as we can, because we think the key to a business surviving, especially in a time like this, is being willing to be adaptable,” she said, adding that, pandemic or not, curbside is likely here to stay. “People have gotten used to the convenience of it.”

“It’s something I’ll never get rid of,” he said, adding that this will be the case regardless of the volume of curbside sales the store is seeing. “The amount of orders that we get on our website for curbside [has] certainly slowed down, but that doesn’t necessarily change the experience. It’s a good service to provide. It’s an offering that a lot of people wanted.”

Levin further emphasized that in this economic climate, reaching out to customers however you can is more essential than ever. “Making the customer happy and making them feel welcome and warm is part of surviving and continuing business in the new world.” MI