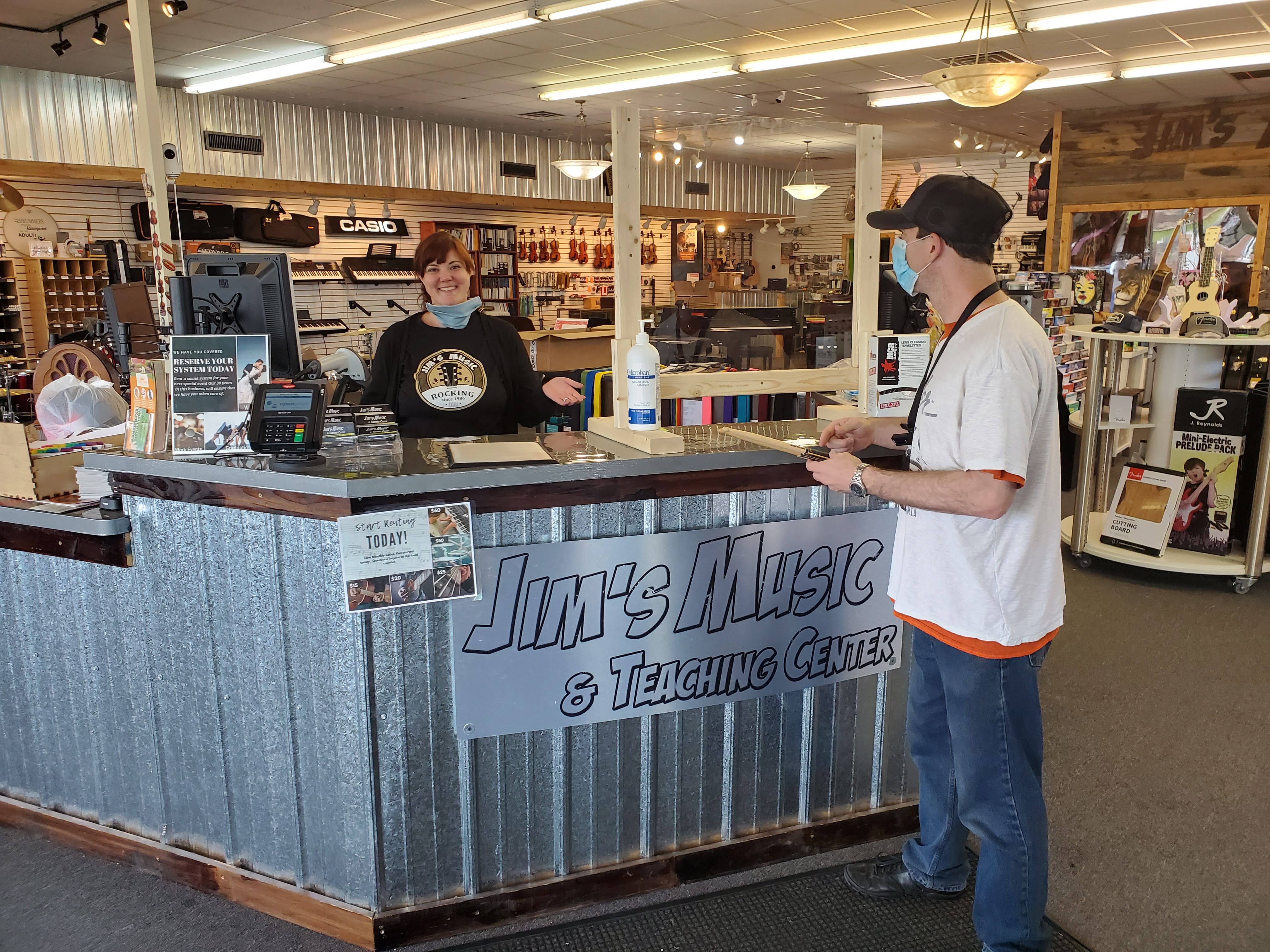 9 New Pieces of Retail Tech For COVID-19 and Beyond

Technology is always changing the way retailers operate — from new listing software to web publishing tools, a team communication system and more. During the widespread quarantine caused by COVID-19, retailers needed to get used to different ways of doing business like videoconferencing and curbside pickup to weather the storm. For some business owners, the virus lit a fire under them, inspiring them to integrate technologies that they have been putting off. As EJ Dombrowski, store manager of Jim’s Music, a music shop with locations in Michigan and Wisconsin, said, “It’s a whole new world, unfortunately.”

Even when the coronavirus case numbers decrease, these technologies are going to give retailers an edge over the competition. Many of the retailers Music Inc. that spoke to reported that they plan on keeping the tech and practices they picked up during the pandemic and believe it will help them adapt to whatever the future of the industry and consumer habits looks like. To give its readers a leg up, Music Inc. has compiled a list of nine easily implementable technologies that successful MI workers can’t live without in a pandemic world and beyond.

One of the first questions companies had to ask themselves back in March was, “How do we stay open while working from home?” TeamViewer makes remote work frictionless. The remote desktop app allows workers to share their screens, remote control and hold online meetings and web conferences. Rick Thacker, owner of Plum Grove Music in Hebron, Indiana, credits the software, in conjunction with the store’s point-of-sale software AIMsi, with making the transition to a work-from-home model possible.

“Some of our team members worked from home, while others came into the office and socially distanced,” he said. “We use AIMsi via TeamViewer and remote desktop on a daily basis, so it was no different for our team to work from home.”

Why would a remote desktop app be useful post-pandemic? After months of sheltering and working from home in some states, it’s becoming clear that the five day, 40-hour workweek might be on its way out. Large and small businesses are altering schedules, with global trendsetters like Twitter and Slack recently announcing that they plan to allow some employees to work from home indefinitely. That might not be possible for retailers, but as online sales bring in more profit and some lessons happen online, it’s not hard to imagine a world with shortened in-store hours.

Curbside pickup became the go-to option for stores forced to close their doors to the public. For smaller locations, a pen and paper are enough to handle curbside pickup orders and scheduling. However, that’s not always an option for medium- to larger-sized stores with dozens of customers queuing up. Having a scheduling app can make the process much smoother. Jim’s Music found success with Setmore, a free online appointment scheduling tool.

“Some of our stores had closed, but in some stores we could do curbside or one-on-one appointments and Setmore was awesome for that,” Dombroski said. “It would let people check-in for repairs or do one-on-one shopping.”

At La Plata, Maryland-based company Island Music Company, the staff noticed that its competitors had full voicemail inboxes and long wait times during the lockdown. To get ahead and stay connected with its customers, it picked up Bowtie. Bowtie, which is made by the company Mindbody, is a software that uses AI to answer the phone and, if the question can be recognized by the technology, sends the patron a text with the answer. It also works with email. Now, instead of having a team of people constantly checking the phones and email, Bowtie monitors them, leaving the staff with more time to sell and give lessons. Keith Grasso, co-owner and co-manager of Island Music Company, is especially grateful for the software’s ability to send texts to customers.

“We received great feedback about Bowtie, especially during the great unknown period of the beginning of [the coronavirus]. We were shut down for 90 days, so customers didn’t know what our hours [were and] how they [could] arrange curbside pickup,” Grasso said. “It was a really helpful tool during the height of that. Most people’s most comfortable form of communication is text message now, so it is perfect.”

Working from home and on shortened hours can cause disorganization and confusion for some employees. Enter Asana, a virtual to-do list maker that’s perfect for keeping distanced and large teams coordinated. Each list can be used and viewed by multiple people at once. Additionally, Asana has different templates and themes, making it visually appealing too.

One of the many perks of Asana is the ability to see employee workloads. Sometimes, a worker may get loaded up with tasks and get stressed. With the software, managers can see how much the employee has on their plate and shift tasks around, leading to increased productivity.

For Sims Music, Clientbook proved to be a game-changer. Clientbook’s webchat feature made it possible for the Columbia, South Carolina-based company to easily communicate with its customers at all hours of the day. The Sims team found the software’s ability useful as it contended with limited hours and staff. With Clientbook, the staff was able to reply in real-time from any location. Justin Sims, general manager of Sims Music, claimed that the program gave them a huge business bump.

“As aspiring musicians reached out from home, we were able to put together a personalized collection of suggested products, text it to them [and] they would be directed to our site to place their orders,” Sims said. “We were amazed at the amount of business that Clientbook brought to us over the last few months.”

In some states, workers who are returning to their jobs are being encouraged to socially distance and wear masks. Remaining mindful of distancing can be difficult, especially during a busy workday when other tasks are top of mind. Inspired to help its own workers, IK Multimedia created Safe Spacer, a social distancing device that gives off alarms if two of the devices come with six feet of each other. The device runs wirelessly on a rechargeable battery and can emit an audio, visual or vibrational alarm when other Safe Spacer devices come too close to it.

“We created Safe Spacer to help our Italian factory workers maintain safe distance during re-opening,” IK CEO Enrico Iori said in a statement. “It’s easy to use, fast to deploy, private and secure, so it can be used comfortably in any situation. We hope this solution helps other companies feel secure as they re-open, too.”

In addition to other features, Checkit creates a compact chat box in the corner of your website with the option to contact associates, similar to Clientbook. Dombrowski took it a step further and made it so messages from Checkit went to his employees’ text messages, a move that means staff are always on hand.

“When we set it up, anyone was able to send us a message, and we could respond in five to 10 minutes,” Dombrowski said. “That made a huge difference. Being able to communicate quickly with our customer base really helped. When they called our competitors, they would get a voicemail saying something like ‘We’re checking voicemail daily. It might take 48 hours to respond.’ If they call us, its a fraction of that.”

Mike Meyer, owner of Meyer Music considers himself lucky. Last year, the company, which brands itself as Kansas City’s band-and-orchestra headquarters, invested in electronic tablets, such as Apple’s iPad and Microsoft’s Surface. Admittedly, the transition process was arduous for Meyer, a man who says he typically enjoys working with technology.

Given the current need for contactless payment systems, though, Meyer is glad his store made the switch. Using tablets has made it easier to accept payments, set up scheduling appointments and answer emails on the go. As a business that’s involved with school music programs, tablets came in handy. Instead of dealing with lines and instrument testing, the tablets let the company schedule curbside pickups and provide its customers with the necessary information.

Like many businesses, Sims Music saw an uptick in online sales and needed an automated way to get all its product online quickly. Sync2Sell made it happen. Sync2Sell integrates Sims’ point-of-sale software with Reverb so that as soon as an item is in its system, it gets posted on each different marketplace.

“Having this connection allowed us to sell more online over the last two months than ever before. During the pandemic, we actually had to hire a new employee to help with all of the online orders, as in-store [and] curbside business has stayed strong and kept our staff as busy as they can be!”