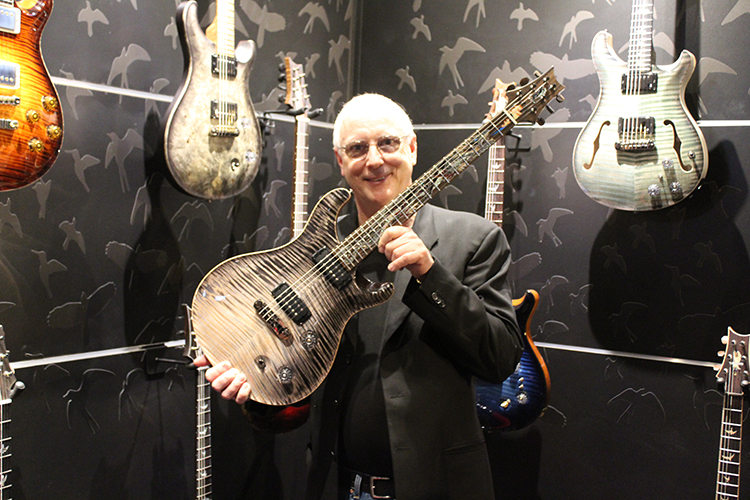 PRS Guitars has introduced the Private Stock 35th Anniversary Dragon Limited Edition, the company’s ninth Dragon model since its first in 1992. Production of the guitar was limited to 135 pieces.

Speaking at a press conference at The NAMM Show, Paul Reed Smith commented on the history of the Dragon.

“The first Dragon that we did, I had this idea of putting this English water dragon on the fretboard and literally the sales department refused to sell it. It was a bad idea,” he said. “Now, we’ve sold 135 of these in one hour.”

The Private Stock 35th Anniversary Dragon is based off of the PRS McCarty model, featuring a McCarty-thickness back, PRS Stoptail bridge, a volume and push/pull tone control and a three-way toggle electronics layout. It features TCI model pickups from Paul’s Guitar and tweaked Phase III Locking tuners. The dragon inlay on the fretboard is by Jeff Easley, a fantasy artist famous for Dungeons & Dragons rulebook covers.

While proud of the guitar’s artistry, Reed stressed its functionality.

“There’s a tremendous amount of work in this beautiful instrument, but for me, I don’t want to just make a piece of art that ends up in a museum,” he said. “I want to make a guitar that works and plays.”

Reed also reflected on the company’s 35th anniversary. “I’m someone who lives in the moment and doesn’t worry about the past,” he said. “But outside [of the PRS booth] the guitar that I got the orders to spark this company is in that case. When I see that I get nostalgic and I feel very appreciative.”